When I first heard about L’Accademia della Crusca in Italy, during a lesson at school, I was not able to create a direct connection between the bran, la crusca, and the most important institution responsible for regulating the Italian language as well as the oldest linguistic academy in the world. I simply accepted this funny name knowing that in Renaissance Italy and in Florence, in particular, metaphors and symbols played an important role.

The Accademia della Crusca – literally ‘the Bran Academy‘ – was founded in Florence between 1582 and 1583 on the initiative of five Florentine men of letters. Its name was derived from their lively meetings, playfully called “cruscate” (‘bran-meetings‘), and came to signify the work of ‘cleaning up’ the language (the bran is the part of the wheat that is discarded when the grain is cleaned up).

The language spoken in Florence during the 14th century was, and still is, accepted as the Italian language. Almost all the writers and poets in the Italian Renaissance literature are in some way connected with Florence, leading ultimately to the adoption of the Florentine dialect, above all the local dialects, as a literary language of choice.

The newly founded institution adopted as its motto a line from a poem by Francesco Petrarca: “il più bel fior ne coglie” (‘she picks the fairest flower‘) and built up a rich symbology based on wheat and bread.

From the beginning the Accademia welcomed Italian and foreign scholars of various fields of interest: besides grammaticians and philologists, writers and poets, scientists, historians, philosophers, jurists and statesmen.

The main accomplishment of the Accademia, the Vocabolario (i.e. Dictionary, dated 1612, reprinted and enlarged several times until 1923), has made an exceptional contribution to the identification and diffusion of the Italian language and has served as an example for the great dictionaries of French, Spanish, German and English.” 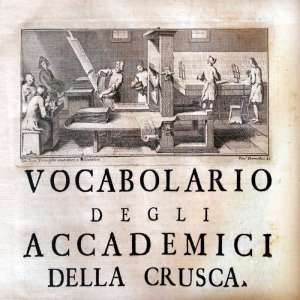 The Accademia della Crusca is housed in the Medicean Villa of Castello, in Florence. 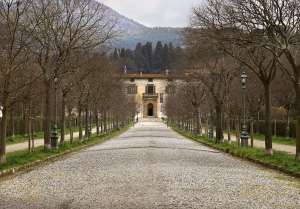 One of the most peculiar halls is The Hall of the Pale, La Sala delle Pale. 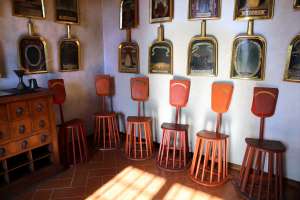 This beautiful Hall takes its name from the 153 ancient shovels that are preserved here, personal emblems of the sixteenth and seventeeth-century members of the Accademia. In another hall you can see the pale belonging to some of the contemporary Academicians, which testify to the desire to keep this ancient tradition alive.

Every shovel bears the academic name of its owner, the motto (a line of verse originating from the 14th century usually composed by Petrarch, chosen to encapsulate the spirit of the enterprise chosen by the Academician) and an image.

The iconography of the shovels has been an object of study precisely because of the peculiarity of the subjects, always linked to the agricultural, domestic or culinary spheres, whose meaning, through their elevation to emblems, is subject to a metaphoric shift. 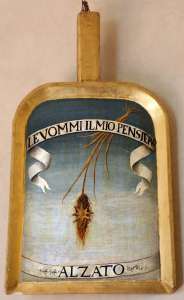 With pride and mirth I salute all the scholars and men and women of letters who contributed and still contribute to the identification and flourishing of the Italian language and culture.