There is something about the definition of “the Angels’language” that fascinates me.

Apparently many poets, men and women of letters and artists spent quite some time on this topic and some are convinced that their own language must be the one spoken by the great winged souls of the universe.

Some days ago I learned that Gaelic is also considered the Angels’ language by the people who speak this mysterious language.

But the American writer Ralph Waldo Emerson once said: “The angels are so enamored of the language that is spoken in heaven that they will not distort their lips with the hissing and unmusical dialects of men, but speak their own, whether there be any who understand it or not.”

What a lovely way to put it, don’t you think?

While collecting information on The Accademia della Crusca (see my previous blog post) I found out that last year this famous linguistic Italian academy published a new book for the series History of the Italian Language in the world – Studies and Texts: “La lingua degli angeli” (the angels’ language), by Harro Stammerjohan. 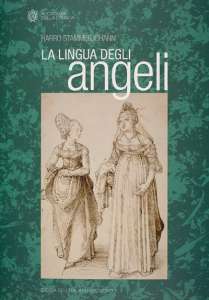 Imagine my joy when I finally found evidence that at least one scholar believes that Italian can also be considered the Angels’ language ????

The following is my rendition in English of the book’s presentation:

Examples and a classification of these words and expressions are the topic of the second part of the book: Italianisms.

In an interview published by Rai in Comunità italofona  Harro Stammerjohan states: …Even if the Italian language knew some detractors in the past, nowadays its beauty is a “mass centainty typical of a Guide bleu” (Tullio de Mauro). It is not only considered a foreign language easy to learn but also delicate, sweet, elegant, fluid, gentle, delightful, smooth, melodic, pleasant, enticing, harmonious and made for music, feminine and created to talk about love… It is so true that also foreigner scholars surrender to its charme: they even try to explain it scientifically.

Harro Stammerjohan, born in 1938 in Bad Segeberg (Germany) and emeritus professor of Romance Linguistic, taught in The United States, Frankfurt and Chemnitz. His main fields of interests are the Italian and French Linguistic. Since 1999 Harro Stemmerjohan is a foreign Academician of The Accademia della Crusca, which in 1970 published his doctoral thesis on the spoken Florentine language.

Notwithstanding my joy and pride for what I have just learned, I somewhat agree with Raph Waldo Emerson’s opinion on the Angels’ language ????